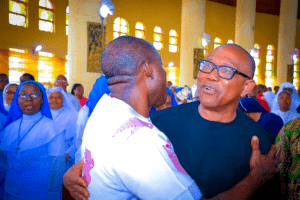 Anambra State Governor Prof. Chukwuma Soludo, has stated that there is no rift between him and the presidential candidate of the Labour Party, Peter Obi, at a personal level.

The two men met at St. Patrick’s Catholic Church at Awka, the Anambra State capital, on Thursday during the thanksgiving mass for Most Rev. Paulinus Ezeokafor in celebration of his 70th birthday and were seen embracing each other while exchanging pleasantries.

When Soludo got into the church, he quickly went to where Obi was sitting and hugged him, while people watched with surprise.

Soludo, who described the rift between him and Obi as mischievous, insisted that the former Anambra governor remained his brother, irrespective of their political differences.

The governor had in an article titled, ‘History beckons and I will not be silent,’ dismissed the chances of the Labour Party candidate in the 2023 presidential poll.

The article generated reactions across the country and particularly from Obi supporters, who heavily criticised the governor.

However, Soludo, speaking during the thanksgiving mass, said he would soon be meeting Obi to iron out their differences, adding that their rift was essentially political.

He also dismissed the rumour of $28m he allegedly collected to run down the LP presidential candidate, saying he would have been a trillionaire if he was into such.

He said, “When I came in, I quickly went to where he sat and hugged him; people watched with bewilderment as if it was a drama, asking is it not the same people quarrelling?

“Let me tell you, we spoke two times just last night. We are brothers. You know I am not one of those politicians that speak from two sides of the mouth. I can’t pretend.

“There is no rift between Obi and me at a personal level. Nobody snatched each other’s wife. What appears to be the rift between us is fundamental political differences. Nothing else.

“So for those forging blackmail and all that, including the one they said I collected bribe to say what I said, I ask them to bring it so I use it to construct roads. If Soludo is into bribery, I would have been a multi-trillionaire.”

While thanking God for the life of Ezeokafor, the governor pointed out that the cleric had been of great influence on him and his government.

Obi did not speak during the thanksgiving service as he left before the end of the programme.

Police Call For Collaborations To Fight Crimes In Hotels

News AP News - 2022-11-25 0
Lagos State Commissioner of Police, Abiodun Alabi, on Thursday called on hoteliers across the country to set up a regulatory body that could work...

News AP News - 2022-11-29 0
Gridlocks caused by fuel queues are making it difficult for commuters and drivers to move freely around the capital of Oyo State, Ibadan. Speaking with...

News AP News - 2022-11-26 0
A female teacher simply identified as Aunty Zara has been arrested by Police Command in Borno for allegedly sexually assaulting a four-year-old pupil in...